Simplified Payment Verification (SPV) is described in section 8 of the Bitcoin whitepaper. It allows a transaction recipient to prove that the sender has control of the source funds of the payment they are offering without downloading the full Block chain, by utilising the properties of Merkle proofs. This does not guarantee that the funds have not been previously spent, this assurance is received by submitting the transaction to the Bitcoin miners. However, in such a case the SPV proof acts as strong evidence of fraud backed by legally recognised digital signature technology.

SPV allows users to securely transact with each other, peer-to-peer, while nodes act to form the settlement layer.

The advantages of using SPV are clear in terms of the volume of data required:

As explained in Section 8 of the Bitcoin whitepaper:

" ... [An SPV client] only needs to keep a copy of the block headers of the longest proof-of-work chain, which he can get by querying network nodes until he's convinced he has the longest chain, and obtain the Merkle branch linking the transaction to the block it's timestamped in ...

The better approach is that transactions between SPV clients are negotiated peer-to-peer and settled on the ledger through the network nodes. An analogy for this is a transaction done using cheque at a much faster speed. The customer hands the the signed cheque (transaction) to the merchant, who then banks or cashes the cheque (settles the transaction on chain). When/if the merchant is satisfied according to the situational risk of the transaction, then they can hand over the goods or services.

There is no such thing as absolute security, there is always a risk against the cost of being defrauded (which decreases exponentially as time goes by). If the transaction is only for a cup of coffee, then the merchant will be exposed to less risk than if the transaction is to buy a car for example, and they would behave differently. If selling a cup of coffee, they can satisfy themselves that the transaction they have received appears to be valid using the SPV process detailed above, and submit the transaction themselves to the network (or even to a trusted miner if using a Merchant API). Given that they will likely receive notification and proof of a fraud attempt within seconds, they will not want to maintain a copy of the entire ledger or even the UTXO set to check against, because the risk they face does not justify the cost. SPV is adequate just as an instant contactless payment without a pin number although arguably the security of SPV is far superior given that discovery of fraud attempts is rapid. Likewise, they will not want to detain their customer while they wait for 6 confirmations - it simply is not necessary - they have received a transaction which appears to be valid, and it has been accepted by the network without a double spend alert. This will probably be enough for them to risk the cost of the coffee.

A Merkle Tree is a structure used in computer science to validate data - see wikipedia definition for more information.

The Merkle Root in a Bitcoin block is the hash contained in the block header, which is derived from the hashes of all other transactions in the block.

A Merkle Path in SPV represents the information which the user needs to calculate the expected value for the Merkle root for a block, from their own transaction hash contained in that block. The Merkle path is used as part of of the Merkle Proof.

A Merkle Proof in SPV proves the existence of a specific transaction in a specific block (without the user needing to examine all the transactions in the Block). It includes the Merkle Root and the Merkle Path.

An article in March 2019 entitled Merkle Trees and SPV (Craig Wright, 2019) clarified some previous misunderstandings around SPV and transaction verification. The article included the following diagram which shows how transaction hashes can be related to the Merkle root in a block header: 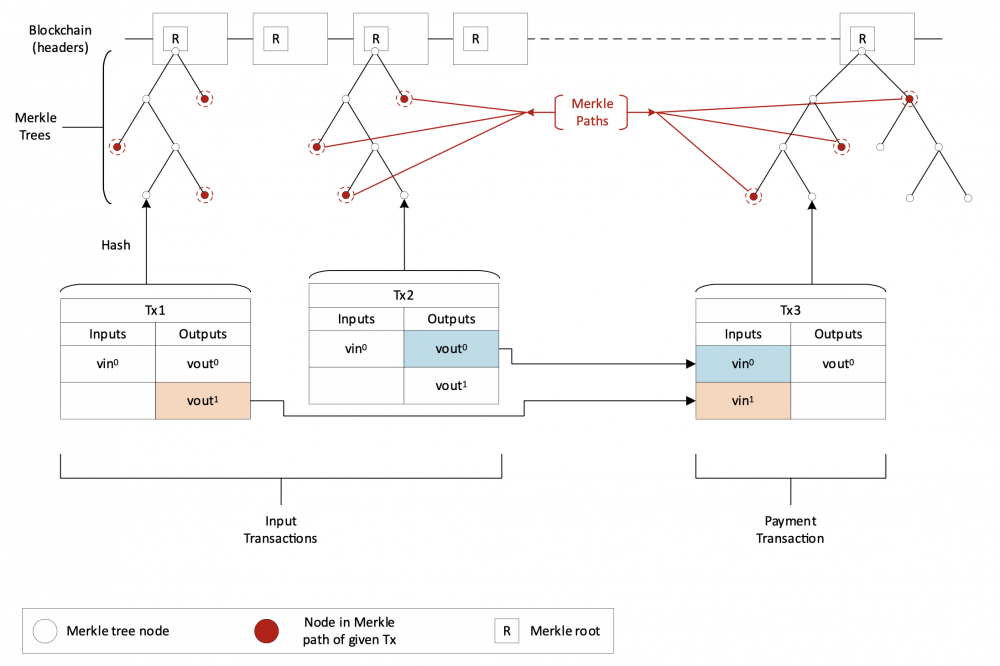 An SPV wallet is a lightweight wallet that uses the mechanism of SPV to construct Bitcoin transactions and payments.

To spend a UTXO, a user of a SPV wallet will pass on the following information to the receiver:

To validate the information, a user computes the Merkle root from the Merkle path of

. The user then compares it with the Merkle root specified in the block header. If they are the same, the user accepts that

is in the chain.

Note that by storing

offline, as any signature on